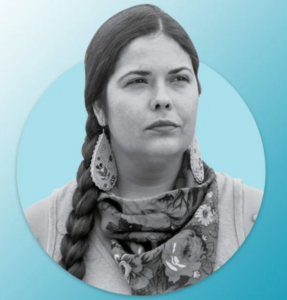 NEW YORK — TIME magazine has named Tara Houska, an Ojibwe from the Couchiching First Nation, as one of its 27 individuals who are “bridging divides across America.”

Houska, 35, is an attorney and environmental activist who gained national attention during the Standing Rock resistance movement to stop the Dakota Access Pipeline as well as her work to have banks around the world divest in oil pipelines. She remains active fighting big oil near where she lives in Minnesota in the fight against Enbridge’s Line 3 pipeline.

Earlier this year, she was once again in the news after she tweeted about her experience passing through security at the Minneapolis-St. Paul International Airport, when a TSA agent said she needed to pat down her braids.

“She pulled them behind my shoulders, laughed & said “giddyup!” as she snapped my braids like reins,” Houska wrote in her tweet. The TSA apologized four days later.

On Thursday, TIME called her “a link between worlds.”

Houska posted on her Facebook page after the TIME article was released:

“It’s more than jarring at times, to go from frontlines of warriors risking themselves for all life to opulent settings with mainstream influencers & decision makers. From connected to disconnected. Standing on a hill in the forest to get service for a conference call on ndn/environmental policy is my norm.”