WINDOW ROCK, Ariz. — Flags will be flown at half-staff on Navajo Nation this Wednesday in honor of World War II U.S. Army veteran and POW Thomas Lynch, Jr., who passed away on July 27, 2021. He was 98. 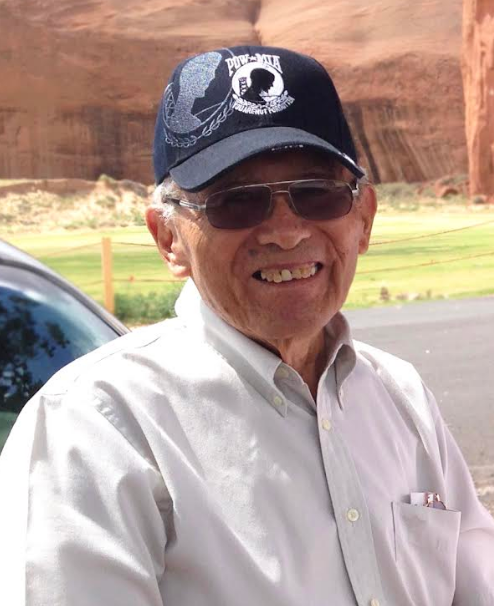 Navajo Nation President Jonathan Nez and Vice President Myron Lizer issued a proclamation on Monday, calling for all flags on the Navajo Nation to be lowered and flown at half-staff in Lynch’s memory.

“We honor and give thanks to our Diné warrior, Thomas Lynch, Jr., who served our country with great honor in World War II and experienced the very worst of conflict as a Prisoner of War,” Navajo Nation President Nez said. “Despite the harsh treatment inflicted on him during the war, he persevered and built a good life for his family while giving back to his communities. He was a loving and devoted husband, father, and grandfather who cherished his family day after day. To his family, we offer our condolences as we pray for strength for his loved ones. We hope that his family takes comfort in knowing that he is now with God at this time.”

Lynch is being remembered for his heroism during World War II. He served with the U.S. Army from May 1943 to December 1945 with the 42nd Rainbow Division. Lynch was captured during the Battle of the Bulge and held as a German Prisoner of War for almost four months.

He was honorably discharged at the rank of corporal with four medals including the Good Conduct Medal, World War II Victory Medal, American Campaign Medal, and European-African-Middle Eastern Campaign Medal with two Bronze Stars. In addition, he was awarded the Navajo Nation Veterans Medal in recognition of his “service in defense of our land and our people.”

After returning home to the Navajo Nation from his military service, Lynch served as a realty specialist with the Bureau of Indian Affairs for 35 years in Window Rock, Ariz.

Funeral services for U.S. Army Cpl. Thomas Lynch, Jr. will be held on Wednesday. Aug. 4, 2021 at 11:00 a.m. (MDT) at the Fort Defiance Veterans Cemetery in Fort Defiance, Ariz. His family has also established a GoFundMe account at: https://gofundme.com/f/remembering-thomas-lynch.