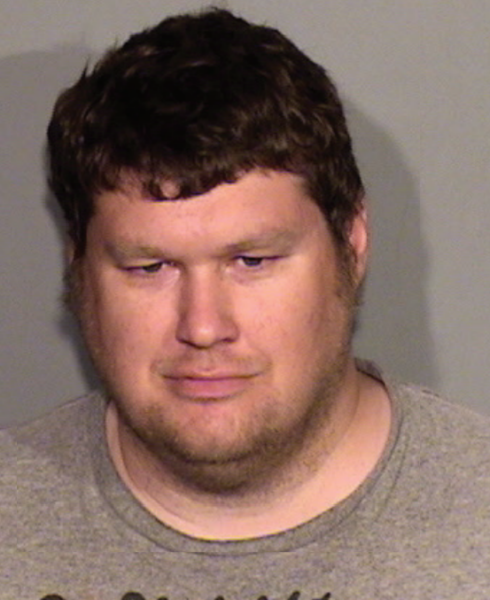 PAGE, Ariz. — A 34-year old man in Northeastern Arizona was arrested Monday evening after he allegedly posted a Facebook message that encouraged readers to use lethal force and “shoot to kill” Navajo citizens.

The post, which has since been deleted, also claims that Navajo citizens are “100% infected with the Cornavirus (sic) and need to be stopped.”

Daniel Franzen, 34, was arrested yesterday evening by Page Police Dept. officers who reviewed the Facebook post, and immediately deemed it “threatening in nature and directed toward Navajo community members due to the suspect’s stated belief,” according to a Page Police Department press release sent to Native News Online Tuesday afternoon.

Franzen was arrested shortly after he made the unlawful social media post and booked into the Coconino County Jail on a Class 3 felony. The arrest occurred on April 6 at 7:53 p.m.

The post has since been removed from Franzen’s Facebook page. However, Native News Online obtained a screenshot of the actual post, which is filled with misspellings. An unedited version follows:

“Danger Danger if you see these Navajo any Where call the police or shoot to kill these Navajo are 100% infected with the Cornavirus and needs to be stopped leathel Force is Athoizied. Page Arizona do not needed this spreading stop these people in any way or from. The Navajo police are not taking responsibility.”

The Page Police Department press release concludes with: “The Page Police Department recognizes the alarming nature of this incident and shares the justified concern this behavior has caused the Navajo community, and others. The police department wishes to remind community members that unlawful hate speech, especially that which singles out protected classes (race, religion, gender, etc.), will be aggressively investigated and violations will be prosecuted to the fullest extent possible.

“Additionally, threats toward Franzen, as well as other retaliatory measures will be investigated in a like manner,” the statement adds.

The city of Page is located in northeastern Arizona and some 200 miles west of Window Rock, Ariz., the capital of the Navajo Nation. While the Census does not break out the number of Navajo people living in Page, the city has a 34 percent American Indian population residing there. 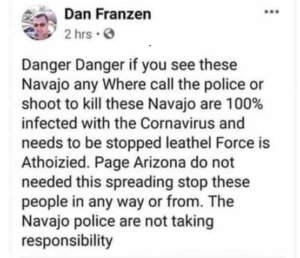