GRAND RAPIDS, Mich. — After endorsing Bernie Sanders in an announcement earlier Sunday, longtime Civil Rights leader, the Rev. Jesse Jackson, made a surprise appearance at Calder Plaza in Grand Rapids, Mich. to tell voters why he was supporting Sanders. 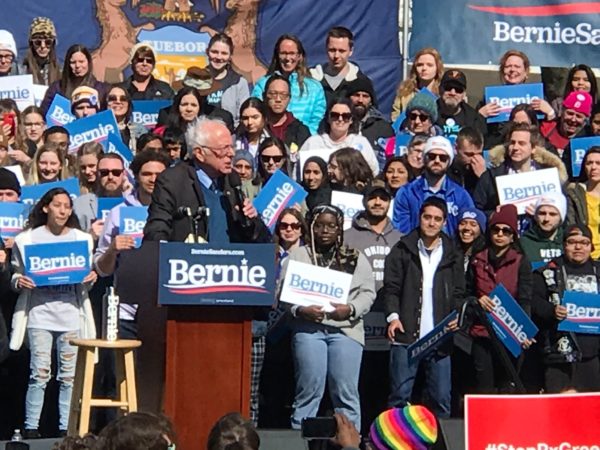 Bernie Sanders calls Donald Trump the most dangerous president in history of the country.

Senator Sanders was introduced and told the crowd he had a surprise for them, then proceeded to introduce Jackson who was waiting in Grand Rapids’ City Hall. Sanders said he endorsed Jackson’s 1988 candidacy as he sought the Democratic party’s presidential nomination and appreciates Jackson’s endorsement now.

“I stand with him because he stands with you,” Jackson told the rally of 7,624 (official count provided by Bernie 2020 campaing) in the bright sunshine of a March afternoon. In 1988, Jackson carried Michigan, though Michael Dukakis ultimately won the nomination and then lost to George H.W. Bush. 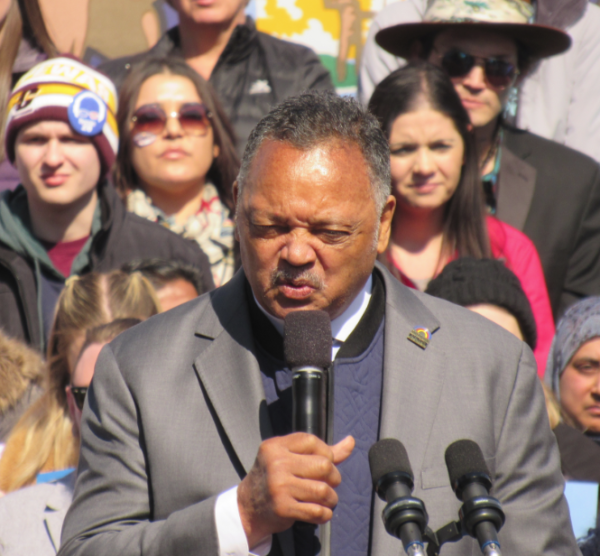 "With the exception of Native Americans, African Americans are the people who are most behind socially and economically in the United States and our needs are not moderate,” Jackson said in a statement released by the Bernie 2020 campaign.

“God has the power to see us through,” Jackson told the crowd as he mixed a little religious fervor to his political remarks. “Red, brown, black and white, all are precious in His sight. Keep hope alive.”

The Jackson endorsement could prove to be large for Sanders who has not fared well in the South among African American voters, beginning in South Carolina where Rep. Jim Clyburn endorsed Joe Biden just days before that state’s presidential primary.

Since then, the momentum in the quest for the Democratic appears to have shifted to former Vice President Joe Biden.

“Democracy is one person, one vote, not billionaires buying elections,” Sanders proclaimed. “When I am elected president, we will pass comprehensive election reform. We will get rid of voter suppression.”

He said there is no reason in America there should be 500,000 people who are homeless. He said the minimum wage should be raised to $15 per hour and in America, there should be equal pay for equal work. He also said teachers starting salaries should be $60,000 annually and every student should be able to attend community colleges and public universities without paying tuition.

He said he is ready to take on Donald Trump in November.

“Donald Trump is the most dangerous President this country has ever seen. He is a pathological liar, a racist and sexist.” Sanders said. “We are going to bring America together.”

On Sunday, the Bernie 2020 campaign announced state chairs and vice chairs of several states. Among them is Holly T. Bird, Native American activist attorney and State vice-chair in Michigan.

“Welcome the Anishinaabe territory, this is the home of the Three Fires Confederacy: the Odawa, Ojibway and the Potawatomi,” Bird told a cheering crowd. “The land that you are on was traded by treaties so that you could live here.” 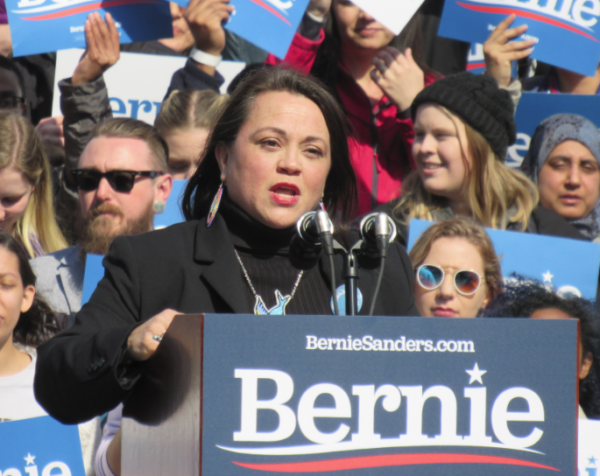 Bird spent over eight minutes on stage telling the crowd why she supports Bernie Sanders.

She cited how in 2013 he co-sponsored the reauthorization of the Violence Against Women Act (VAWA), which brought much needed funds into Indian Country to combat violence against Indigenous women.

Bird also mentioned Sanders’ support for the formal apology in 2008 to the violence committed against Native people. She also said Sanders supported the legislation to include American Indian and Alaska Native health provisions within the Affordable Care Act.

“Bernie has the most comprehensive climate change plan…that alone would have make me vote for Bernie, but there are so many other reasons, Bird said.

At stake in Michigan are 125 delegates to the Democratic National Convention. With stakes so high, Sanders left Grand Rapids to campaign at the University of Michigan at Ann Arbor. He will be joined there with Rep. Alexandria Ocasio-Cortez (D-NY).

Looking for a win in Michigan, Biden will campaign in Grand Rapids and Detroit on Monday. Sen. Kamala Harris (D-CA), who endorsed the former vice president on Sunday, will join Biden in Detroit. 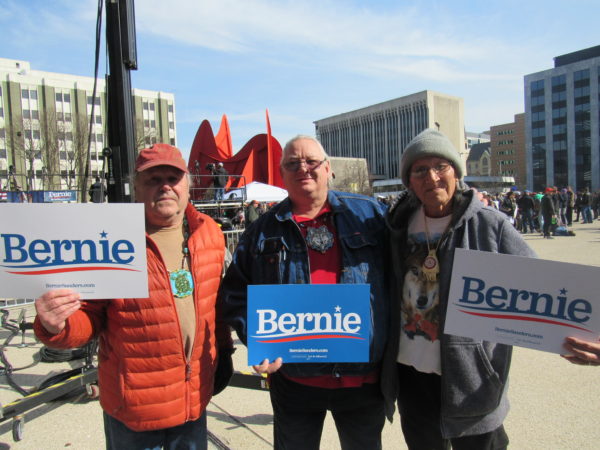 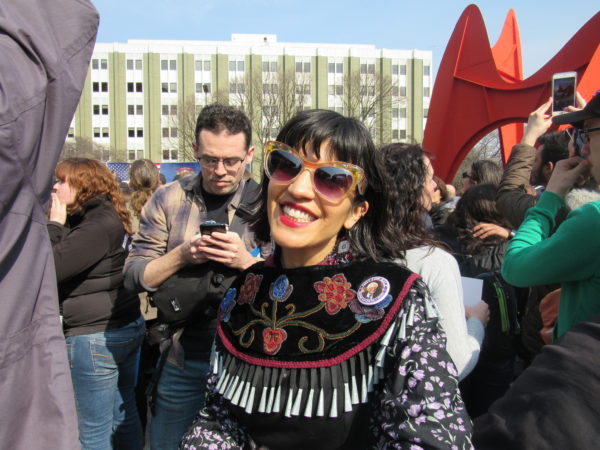 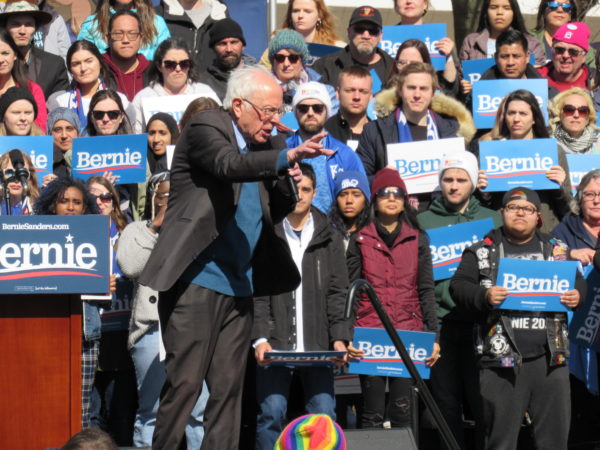 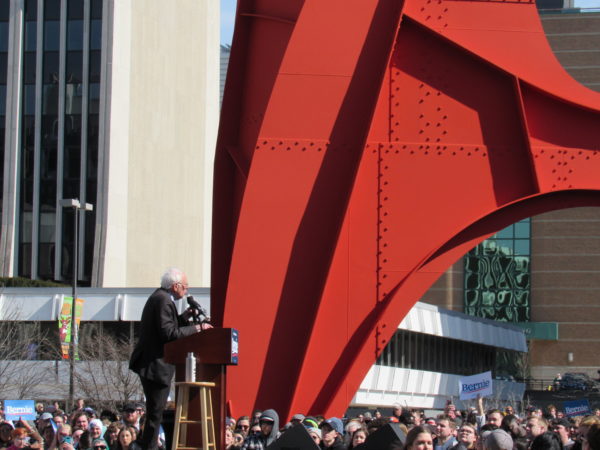 Bernie Sanders is looking to win Michigan primary for second time. He defeated Hillary Clinton in 2016, 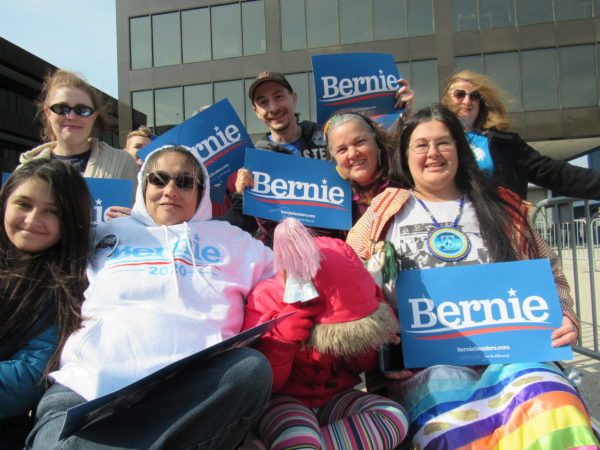