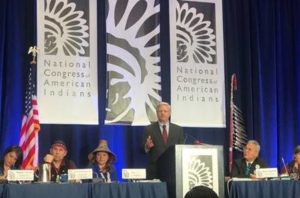 “We have made great strides in getting six Indian bills to the President, and there is a commitment by the President to sign into law even more Indian bills once they hit his desk. We can build upon this achievement. I want to thank you all for your continued support in the Committee’s work in helping Indian Country.”

In his remarks, Senator Hoeven outlined the achievements of the Senate Committee on Indian Affairs during his Chairmanship, as well as the ongoing work to ensure that the issues facing tribal communities are heard and addressed by Congress.

Additionally, Senator Hoeven highlighted that the Native American unemployment rate has reached historic lows, greater economic opportunity in agriculture has been made available for Tribes and tribal producers, and native victims of crime have been provided critical funding to improve recovery services.