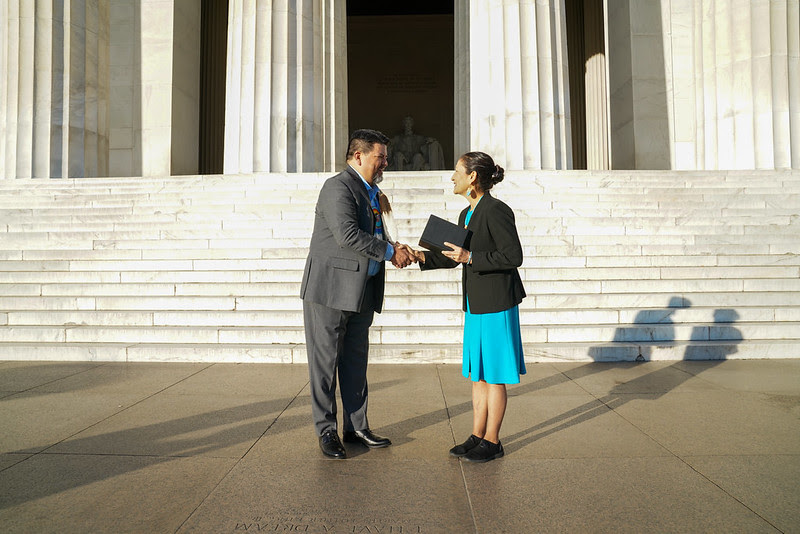 Charles F. “Chuck” Sams III (Cayuse and Walla Walla) was sworn in as Director of the National Park Service (NPS) by Secretary of the Interior Deb Haaland (Laguna Pueblo) today. Sams is the first Tribal citizen to lead the agency.

“I am honored to serve as Director of the National Park Service and thank President Biden and Secretary Haaland for entrusting in me the care of one of America’s greatest gifts: our National Park System. I am also incredibly proud to work with the dedicated employees of the National Park Service. I have no doubt that together, we’ll be able to expand access to the outdoors, protect America’s public lands, and upgrade our nation’s infrastructure system through the Bipartisan Infrastructure Law,” said Sams in a statement.

“Everyone should have access to the outdoors no matter where they live, how much money they have, or what their background is. Chuck Sams understands the importance of connecting people to nature, and I am thrilled to work with him as the Interior Department works to make our national park system accessible to all Americans,” said Haaland in a statement. “Under his leadership, the National Park Service will continue to protect our public lands for generations to come and make critical investments in the vast infrastructure that sustains our public lands and national parks.”

Sams will help implement the Great American Outdoors Act and the Bipartisan Infrastructure Law. In addition to historic funding for climate resiliency initiatives and legacy pollution clean-up, the infrastructure law provides for a five-year reauthorization of the Federal Lands Transportation Program, which will help invest in repairing and upgrading NPS roads, bridges, trails and transit systems. The law also invests in projects that will help fund bridge replacements and resiliency, repair ferry boats and terminal facilities, and maintain wildlife crossings.

Sams has worked in state and Tribal governments and the non-profit natural resource and conservation management fields for more than 25 years. He most recently served as a Council Member to the Northwest Power and Conservation Council, appointed by Oregon Governor Kate Brown.

Sams holds a Bachelor of Science degree in business administration from Concordia University-Portland and a Master of Legal Studies in Indigenous peoples law from the University of Oklahoma. He is a veteran of the U.S. Navy. Chuck is an enrolled member, Cayuse and Walla Walla, of the Confederated Tribes of the Umatilla Indian Reservation, where he lives with his wife and their four children.

The National Park Service has been without a Senate-confirmed leader for nearly five years.