Trump wants to build wall to protect the resort that bears his name … from global warming effects.

In the past year Donald Trump has proposed the building of two different walls. The nation is well versed on the first wall. It’s a big one, along our southern border, to be paid for by Mexico, because, as he outlined in his rambling Presidential campaign announcement speech last June, “They’re sending people that have lots of problems, and they’re bringing those problems with us. They’re bringing drugs. They’re bringing crime. They’re rapists.”

But more recently, Donald has proposed the building of a second wall. This one will be just off the coast of Ireland.

“The New York billionaire is applying for permission to erect a coastal protection works to prevent erosion at his seaside golf resort, Trump International Golf Links & Hotel Ireland, in County Clare. A permit application for the wall, filed by Trump International Golf Links Ireland and reviewed by POLITICO, explicitly cites global warming and its consequences — increased erosion due to rising sea levels and extreme weather this century — as a chief justification for building the structure.”
(Politico May 23, 2016)

Over the past several years, and throughout his campaign, Donald Trump has railed against the science of global warming. In 2014 he referred to global warming as [expletive] and in 2013 he called it a “total hoax!”

But according to his application, which was first reported by Politico, when it comes to his personal business and finances, Donald Trump is just as firm a believer in global warming as he is convinced of the threat of immigrants and Muslims.

And when Donald Trump gets scared of something, he builds a wall.

If you know American history and understand the worldview upon which this nation has been founded, then the lack of consistency between Donald Trump’s public statements on global warming and his personal responses to global warming are not the least bit surprising.

The following quote from Pope Nicholas V in the Papal Bull Dum Diversas written in 1452 has deeply shaped our nation. This Papal Bull, along with others written between 1452 and 1493 are collectively known as the Doctrine of Discovery. This doctrine helped create a worldview that placed white, European Christian males at the center and reduced most everything else in the natural world to mere assets for their exploitation and profit.

“…invade, search out, capture, vanquish, and subdue all Saracens and pagans whatsoever, and other enemies of Christ wheresoever placed, and the kingdoms, dukedoms, principalities, dominions, possessions, and all movable and immovable goods whatsoever held and possessed by them and to reduce their persons to perpetual slavery, and to apply and appropriate to himself and his successors the kingdoms, dukedoms, counties, principalities, dominions, possessions, and goods, and to convert them to his and their use and profit”

In the worldview of the Doctrine of Discovery; water, land, plants, animals, even other humans are all considered to be resources that exist primarily to serve and benefit the dominant.

It is this worldview of dehumanization which leads our educational system to still teach that Columbus discovered America. Because you CANNOT discover lands that are already inhabited. That action is more accurately known as stealing or conquering.

A worldview shaped by the Doctrine of Discovery is only able to acknowledge crisis like global warming when they threaten one’s bottom line or personal safety. The values of exploitation and profit are top priority, second only to the comfort and survival of the dominant.

My father is a wise native man who has lived between the four sacred mountains of our Navajo people nearly his entire life. Several years ago he was serving on a committee for a national, predominantly white, Christian organization that was looking at the issue of global warming and creation care. He told his fellow committee members that the reason this country has such a horrible record of caring for the environment is because they have a Doctrine of Discovery that skews and distorts their relationship to the natural world.

In Navajo we have a word, “hozho,” which translated means harmony or balance. Regularly, as my ancestors have done for centuries, I wake up early in the morning and greet the sunrise with my prayers. I pray for the day, relationships, community, and the environment. I strive to walk in beauty, with people, nature, and Creator. 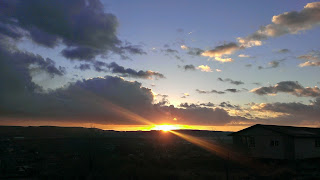 Watching the sunrise daily is a humbling experience that provides an amazing perspective. The sun rises, and it sets. There is nothing we can do to speed it up, or to slow it down. It happens whether we witness it or not. We cannot control it. Yet, all of life, is completely dependent upon it.

The Doctrine of Discovery is all about dominance. It’s about establishing a hierarchy for the purpose of taking and maintaining control. And it leads to an incredible arrogance, both towards nature and other people.

It was the worldview of the Doctrine of Discovery that led Bill Clinton’s campaign in 1992 to develop the mantra “It’s the economy, stupid”—campaigning to the lie that the health and well-being of a nation are purely the sum of its economic indicators.

And it is the Doctrine of Discovery that leads the presumptive nominee of the Republican party to call a devastating human crisis like global warming [expletive] and a “total hoax!”

That is, until the rising sea levels threaten the picturesque landscape on the 18th green on his luxury golf course.

For a nation based on the worldview of the Doctrine of Discovery it is not surprising that it took a real and practical threat to Donald Trump’s personal finances and investments to get him to acknowledge something that the worldwide scientific community concluded years ago. Global warming, left unaddressed, will cause a humanitarian crisis on a global scale.

And it is even less surprising that his response, after acknowledging global warming, was not to propose policies or programs to benefit and help humanity. But merely to protect his personal financial investments, with the building of another wall.

The worldview of the Doctrine of Discovery is not a partisan problem, it affects the very foundations of our nation, everything from our capitalism which is driven by profits, to SCOTUS basing the legal precedent for land titles on the principle of “discovery” and the dehumanization of Natives. Unfortunately, the values of the Doctrine of Discovery are just as American as baseball and apple pie.

And when you’re campaigning to be the next President of a colonial nation that is still blinded by a Doctrine of Discovery and comprised not only of immigrants, but also of more than 6 million indigenous people representing literally hundreds of tribes, it is imperative that you understand something.

“It’s about so much more than the economy, stupid.”

Mark Charles (Navajo) serves as the Washington D.C. correspondent for Native News Online and is the author of the popular blog “Reflections from the Hogan.” His writings are regularly published by Native News Online in a column titled “A Native Perspective” which addresses news directly affecting Indian Country as well as offering a Native perspective on national and global news stories. Mark is active on Facebook, Twitter,YouTube and Instagram under the username: wirelesshogan.