KANSAS CITY — After a long overnight wait to learn the results of the primary votes in Kansas’ 3rd Congressional District, Ho-Chunk Sharice Davids has won the Democratic party’s nomination to face GOP Congressman Kevin Yoder in the general election in November.

In the primary, Davids was among six candidates vying for the nomination. The unofficial vote was 22,891 votes (37.3 percent ) for Davids over her closest opponent David Welder, who garnered 20,803 votes (33.9 percent).

What is impressive is Davids beat Welder, whose campaign was aided by a visit by Senator Bernie Sanders into the district.

The congressional district is viewed as competitive in November as evidenced by a visit by Vice President Pence who was in the district to raise funds for Yoder during the primary.

The @KCStar has called it – I’m humbled to be your Democratic nominee in #KS03. Thank you to my 5 fellow Dem candidates, who were each a part of energizing our district throughout the primary. I look forward to working w/ them & all of you to change the face of KS politics. 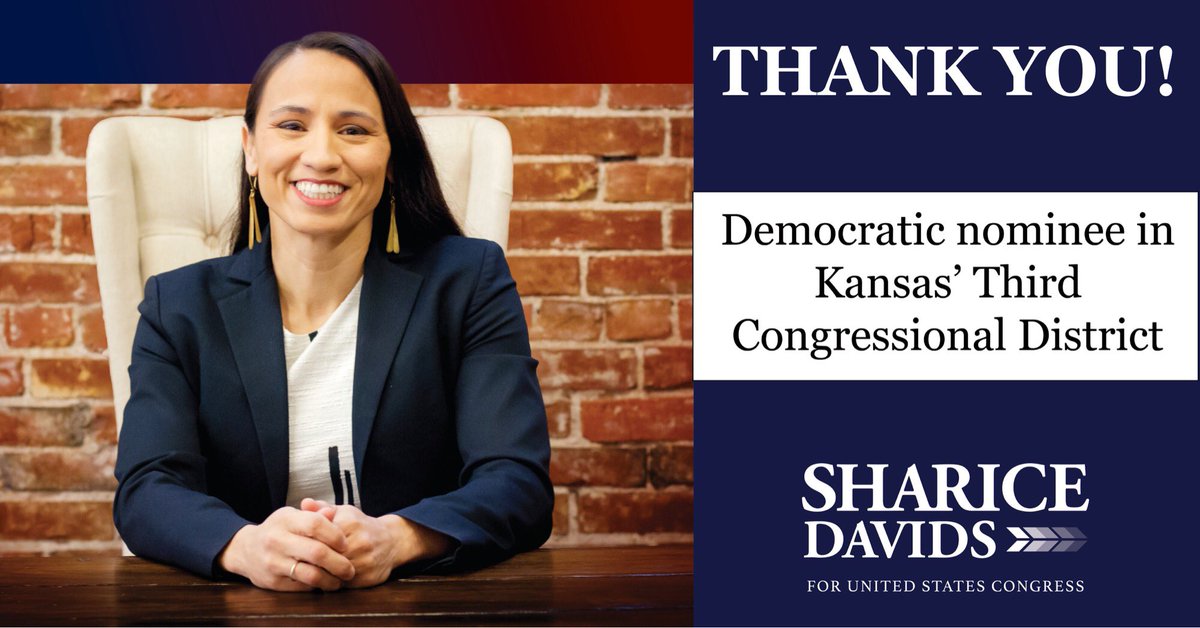 Davids, an attorney, is a tribal citizen of the Ho-Chunk Nation. She is now one of two American Indian women who have a chance to become the first ever member of the U.S. Congress. Deb Haaland (Laguna Pueblo) won in the New Mexico’s 1st Congressional District in June.

“Sharice is a fighter through and through, and with her primary victory, she’s prepared to take on Congressman Kevin Yoder and show 3rd District voters that she’s the best choice to represent them in Congress. Unlike Yoder, Sharice will work to protect access to affordable health care and make decisions based on what’s best for people in the district — not as a pawn of Donald Trump. She’s also on track to make history as one of the first Native American women in Congress, the first openly gay member of the Kansas congressional delegation, and the first Democratic woman to represent this district. EMILY’s List is proud to congratulate Sharice on her hard-earned victory and we look forward to helping her flip this seat in November.”

Levi Rickert, a tribal citizen of the Prairie Band Potawatomi Nation, is the publisher and editor of Native News Online. Previously, he served as editor of the Native News Network. He is a resident of Grand Rapids, Michigan.