The first of these primary elections is in Washington. Votes will be counted on Tuesday, Aug. 2. It’s mostly a state that votes by mail. And, it’s a state with a blanket, or a top-two primary. That means the first two candidates will go on the November ballot regardless of party. There are five candidates, two who “prefers Republicans,” two who “prefers Democrats,” including Pakootas, and a candidate who “prefers Libertarian.” (The use of “prefers” is because the parties have no way to nominate candidates in this system; so anyone can claim any label they want. This language was a compromise.)

Pakootas asked for help from his supporters by email last week: “Winning this election will require a BIG effort! I need your vote. But I also need the votes of your friends, family members, and neighbors. Statistics show that a person will be more likely to vote if they know their friend has already voted. Let’s get all our neighbors engaged in the civic process, it’s just too important to be complacent. Please don’t let someone else make this decision for you! Voting is incredibly important and worth a short conversation. All you have to do is ask one simple question: ‘Have you voted for Joe?’”

Pakootas is the former chairman of the Colville Confederated Tribes and later chief executive of the tribes’ enterprises. In that job, he revived 13 money-losing tribal businesses. The University of Washington awarded him the Bradford Award, given annually to a minority businessman, for his leadership. (Previous: Six Seats Native Candidates Can Win to Flip Congress.)

Pakootas main primary opponent is Cathy McMorris Rodgers. She’s a member of the Republican House leadership team. Two years ago Pakootas unsuccessfully challenged McMorris Rodgers for the seat. In that race he was outspent by a 12:1 margin. This time around Pakootas has more resources, but not nearly enough. As of a July 13 report, McMorris Rodgers has raised more than $2.4 million to Pakootas’ $166,729. (That’s more than a 16:1 difference.) Northwest Tribes are a significant source of Pakootas’ fundraising, including his own tribe, Colville, plus Quinault, Puyallup, Spokane, Tulalip, Yakama, Jamestown S’Kallam, Swinomish, and Chehalis.

Should he win Tuesday, Pakootas will need more money for the fall campaign to be competitive with McMorris Rodgers.

And one of the issues for any Republican is how they stand on Donald Trump (so odd, I know, usually a party’s nominee already matches the philosophy of its members). McMorris Rodgers, like many elected Republicans, did not attend the Republican National Convention in Cleveland. However in May she endorsed Trump saying it’s essential to respect the will of Republican primary voters.

From ABC News: “Mr. Trump won millions of supporters by speaking his mind honestly; calling out the dysfunction in Washington, D.C.; and talking outside the politically correct box,” McMorris Rodgers said. “In the months ahead, he will have to earn the presidency by demonstrating that he has the temperament for the job and plans to empower every American to pursue a future of opportunity and freedom.”

Every Monday Pakootas posts about his policy differences with McMorris Rodgers with the hashtag, #McMorrisMonday. Recently he wrote: “We must not forget that OUR Representative has endorsed Donald Trump. We’ve all heard the racist, misogynistic, prejudice, hateful, uneducated, and fear-mongering comments that Donald Trump has made. My opponent must now navigate within a culture that perpetuates and even promotes this behavior. She says that Donald Trump “Owes it to our country to treat everyone respectfully and to build an inclusive coalition.” How is it possible for my opponent to maintain her stated values while also supporting Mr. Trump’s toxic ideology? In light of the serious issues that our country is currently facing, do these hateful values and destructive policies really represent our District?”

Tuesday’s primary will be the first chance to see what the impact of Trump might be on races other than the presidential contest.

Democrat Victoria Steele makes a pitch to a voter in Arizona’s 2nd Congressional District.  The primary is Aug. 30 and absentee ballots will go out in the mail this week. (Photo via campaign’s Facebook page.)

Trump Effect Could Propel Steele to Congress (If She has Money)

The Trump Effect might be even more important to Arizona’s Victoria Steele.

Her opponent, Rep. Martha McSally, is a Republican who will not endorse Trump. She told The Tucson Weekly: “I have never endorsed a politician in my life and I’m not going to start now, so you can ask me for the next three and a half months, but it’s not happening. “Who we each vote for is our responsibility as a citizen and a voter and, in that role, have a vote just like you have a vote and I personally believe that is between me, God and the ballot box.”

Steele said the incumbent could not “summon the courage to stand up for people that Trump attacks.”

However when it comes to money McSally is close to the top of the list. She’s raised $5.6 million so far compared to Steele’s $195,708. Even more important, at least this month, Steele trails Democrat Matt Heinz in the money race. He’s raised $815,974.

Unlike Pakootas, Steele has not had significant support from tribes or tribal enterprises. Sixty percent of her fundraising is from individual donors, often in small amounts of $25 or $50.

So why are tribes not investing in a Steele candidacy? Unfortunately too many tribes and tribal enterprises do politics the same way as other “special interest groups.” That means investing in candidates who are already elected or likely to win. Investing in our own is not good politics. Or so they tell me. The only way Steele can get the money to be competitive especially in the next 30 days is for individual tribal members to step up and contribute or better a few tribes. (Previous: The Hidden History of Why Native Americans Lose Elections.)

The case for Steele is clear. What we need in Congress is a “caucus” that is made up of Native people, similar to the Congressional Black Caucus. (There is a Native American caucus now, but it’s more of an interest group rather than an indigenous network.) The only way that’s going to happen is for people to rally around Native candidates when they run. Perhaps it’s not good business, at least in the way that modern campaigns operate, but it is the right thing to do when you believe that Indian Country needs more voices in Congress.

There is another reason to back Steele in this election: Donald Trump. Her district may be only about 2 percent Native American, but the fastest growing group are Latinos. The group, One Arizona is hoping that Latino registration will top one million in the state before election day. Pew Research says the Arizona 2nd Congressional District says eligible Latino voters are nearly 22 percent of the population. That alone is enough to change the outcome of a race that was won by less than a thousand votes out of 220,000 cast. 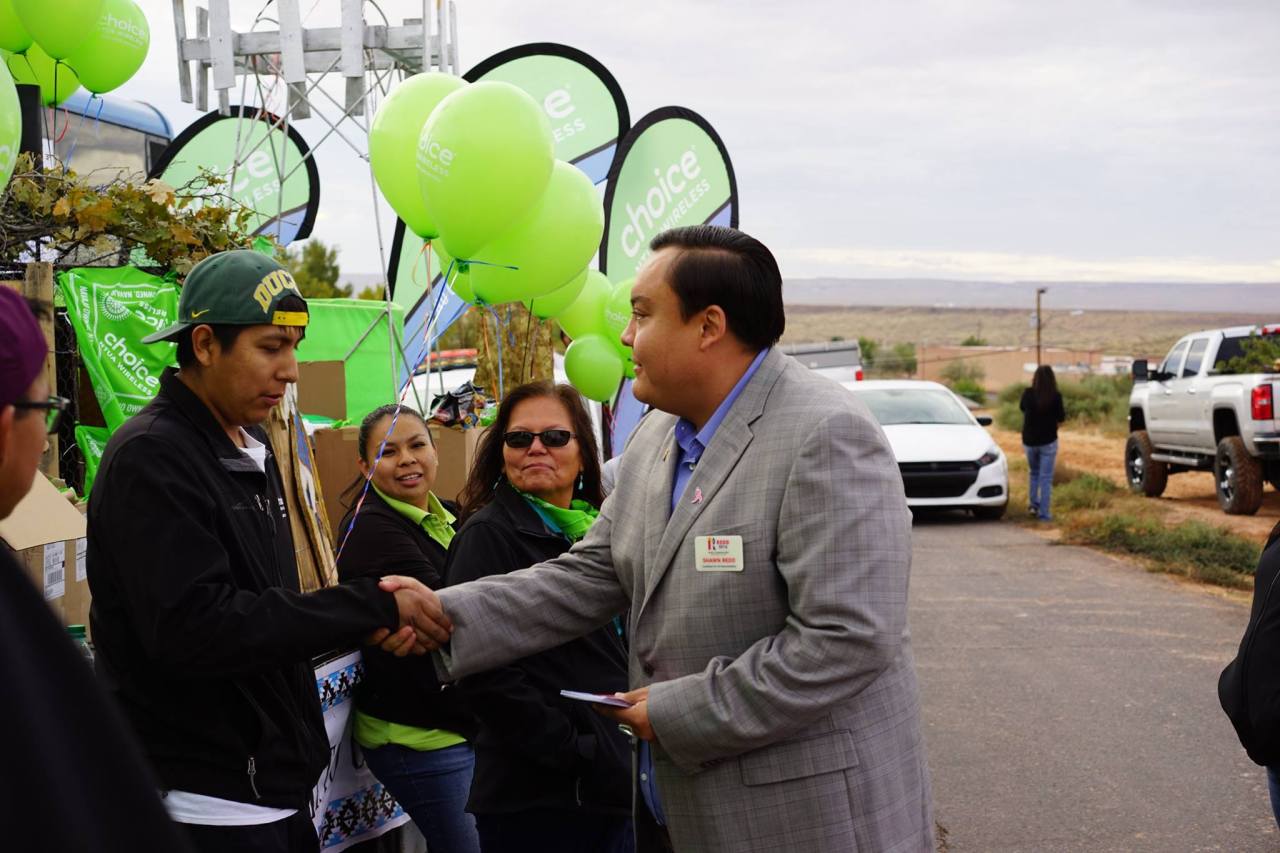 Demographics Challenge for a Navajo Republican

Navajo candidate Shawn Redd has raised only $23,549 and is running in a crowded Republican primary. State Sen. Carlyle Begay dropped out of that race in late June.

Redd’s biggest challenge is running as a a self-described conservative Republican when most Navajos are Democrats. In order to vote in the Arizona primary, voters either have to register as Republicans or be unaffiliated.

Arizona’s first congressional seat has the most Native American voters of any district in the country.

Redd, for his part, is not running away from Trump. He recently posted on Facebook support of his party’s nominee. “Elizabeth Warren is a Fraud and Trump has every right to say it! The NY Times didn’t like me telling them that and cut the interview short. I feel strongly about this issue and was glad to voice my opinion to the liberal media even if they didn’t print much of it! Real Native American Women deserve the opportunities given to Sen. Warren that she felt her high cheek bones entitled her to! ‪#‎VoteRedd‬‪#‎Trump‬.”

Mark Trahant is the Charles R. Johnson Endowed Professor of Journalism at the University of North Dakota. He is an independent journalist and a member of The Shoshone-Bannock Tribes. On Twitter @TrahantReports