Special to the Times | Bazhnibah
A banner shows the logo at the candlelight vigil held on Wednesday in Window Rock on the National Day of Remembrance for Murder Victims.

WINDOW ROCK — It was a beautiful fall evening. There was a sense of serenity about the event.

People sat silently, some with heads down, some with a look of hope and others whispered softly amongst each other.

As a photographer, I felt like I shouldn’t be there with my camera, but I also saw an opportunity to tell a story of the event. The story is about bringing awareness about the missing and murdered Indigenous women, girls, men and relatives.

The people gathered to tell their stories and share their feelings. On Wednesday, a candlelight vigil was held at the Navajo Nation Council Chamber to honor and remember victims.

Fifty years ago, a cousin was reported missing and then murdered many miles away in Houston. She was a beautiful woman, full of life and had goals for the future.

Another cousin was murdered in Oklahoma City because he was gay.

Their lives and many others ended so abruptly and needlessly. During those times, families were told, “Don’t talk about it.”

Never did we think to put their photographs on a banner or write their names on a poster board, let alone call their names out loud. People suffered in silence and some fell to hopelessness and shame.

Times are changing. Now people are encouraged to talk about it. More awareness walks, rallies and candlelight vigils are also being held such as Wednesday’s.

Special to the Times | Bazhnibah
Hands hold a lighted candle at the candlelight vigil on Sept. 25, the National Day of Remembrance for Murder Victims.

Family after family talked about their experiences with tragedy – some violent, some obscure, but the hurt and the anger are still the same, whether 50 years ago or as recent as weeks ago.

The people described their feelings and did not withhold their tears. It was heart-wrenching to hear all the stories. But I could see that it was somewhat therapeutic to talk about it and to share the stories.

Councilwoman Amber Kanazbah Crotty of the 24th Navajo Nation Council and others helped to pull this vigil together, inviting families to share their stories and communities to lend support.

In 2016, Ashlynne Mike was kidnapped and brutally murdered near Shiprock. Three months later in the same year, Loreal Tsingine was fatally shot.

More and more of these violent crimes committed involved the Navajo people in recent years. The unbearable thoughts of these senseless acts have brought Crotty to action.

As a Council delegate, she has much leverage in bringing awareness to these issues surrounding the missing and murdered, human trafficking and domestic and sexual violence to the Navajo Nation and to Washington, D.C., where she recently testified on Capitol Hill.

The hope is that all Navajo citizens can take action to bring about change on and off the reservation. Changes in policies and laws to bring justice and to provide safe places for emotional support are much needed.

The goal for the Nation as stated by Crotty is to create a safe place for the Navajo people.

“There is a cycle of violence that we need to break,” she said. “People are discounted, violated, dehumanized, and our loved ones cannot be forgotten. Their lives mattered.

“It has a ripple effect – some have internalized the pain and are numb to the pain,” she said. “This cannot be normalized. And instead of getting support, many feel alone and isolated. We need to create that support system.”

For the future, healing is needed for those affected by tragedy. There are some Diné behavioral health practitioners who are willing to work with the Nation. And that is what Crotty is working on. 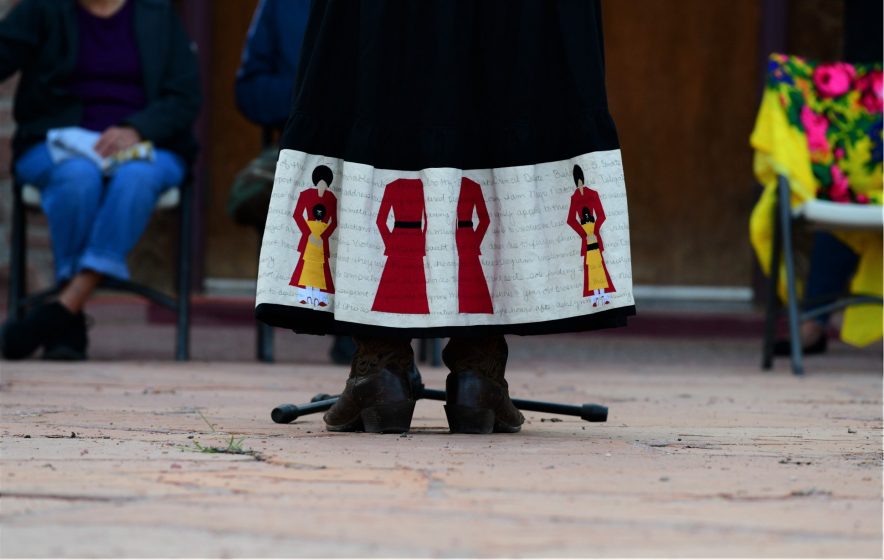 Special to the Times | Bazhnibah
Council Delegate Amber Kanazbah Crotty wore a skirt made by her mother, Susan Hudson, which has her written testimony on the missing and murdered women. A candlelight vigil was held at the Navajo Nation Council Chamber Wednesday night.

She said, “There is a need for the children to have an outlet and to have a network of individual and group support for all.”

As night fell and the stars appeared, candles were lit, and prayers spoken. The flicker of candlelight seemed reassuring. It is said that lighting candles is a sacred ritual.

People hugged and gave each other support as if to evoke a sense of blessings and hope for the future. I took photographs of what I felt was important and nothing more.

Editor’s Note: This article first appeared in the Navajo Times. Used with permission. All rights reserved.