I have been deeply moved by all the social media coverage I saw on Facebook and Twitter and Youtube during the holiday season about the Dakota 38 riders retracing their ancestors’ path back to their homelands in Minnesota and commemorating the hangings of 38 Dakota men, the largest mass hanging in U.S. History, for their part in the Dakota Sioux Uprising of 1862.  If you want to learn more about this ride I highly recommend this documentary about it: Dakota 38.

This social media mourning shared by Native people across the country contrasted greatly in my mind with the lack of coverage these important events in our people’s history received nationally by the mainstream media.  There are always things happening in Indian country that never make it into the mainstream news and certainly, we Indian people are accustomed to it. We never expect the issues near and dear to our hearts to be covered 24 hours on CNN or to trend on Twitter or on Buzzfeed. And yet, this year, I felt it more than usual.

And then, on December 29th, three days after the Dakota 38 riders made it to Mankato, Minnesota the site of the hangings, a tweet about the Wounded Knee anniversary featuring a photo of the burial of the Lakota victims with my twitter handle attached began filling up my twitter feed.  I clicked on the photo only once but the image remained burned into my mind. 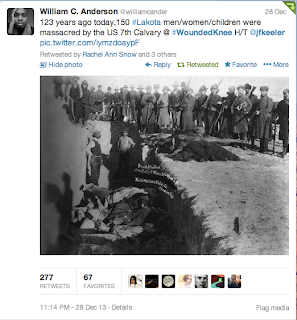 Not the kinds of things the rest of America was thinking about during the holiday season.  In fact, what was on TV that day was 3 and half hours of the Washington Redsk*ns losing yet again.  Yes, a football team in our nation’s capital with an ethnic slur against us got all the coverage.  Yeah, this guy’s team:

I couldn’t help but to think about the stories I’d been told about about both the Minnesota Sioux Uprising and Wounded Knee.  In my family, we have a personal story about each of them.  The first has to do with my grandmother’s great-grandfather Owl Man.  The Santee Dakota were refugees and fled Minnesota and came to our people, the Yankton Dakota Sioux in South Dakota.  We took them in, but Owl Man was forced to make a terrible sacrifice to protect the people from the wrath of the U.S. Military.  He had to kill one Santee to save the rest and our own people from mass slaughter.  It was a decision that haunted him for the rest of his life.  Here are some photos of him taken during his visit to Washington DC in 1867 as part of the Yankton Delegation.  In the photo taken with President Andrew Johnson at the White House he is the only one in an eagle feather headdress.

It also made me think of my grandmother’s uncle the Rev. Charles Cook who was the mixed-blood Yankton Dakota Episcopalian minister at Wounded Knee during the massacre.  She told me how he had turned his church into a hospital during the massacre and with Dr. Charles Eastman, another Dakota worked tirelessly to save the lives of their people.  She told me he died two years later of a broken heart.  He was only in his 20’s at the time.  Funnily enough, in the HBO movie done about Charles Eastman’s life he is portrayed by a balding, middle-aged white man.  However, Eastman is more accurately depicted by Canadian Saulteaux actor Adam Beach.

I think a lot about these things, how we survived, what the price was, what it means to survive and be unknown in your own “country.”  I try to distill these things and to explain why it is not okay to tell us to just forget and move one or why it is painful to me to see your culture used for cheering for football teams in our nation’s capital.  I hope this adds to the discussion.  I think a lot of my family stories, although, written down in various places including Vine Deloria Jr.‘s book about our family: Singing for a Spirit, which recounts the life and vision of Owl Man in great detail, and the wonderful book about Yankton Oral history, Remember Your Relatives: Yankton Sioux Images 1851-1904, and in Elaine Goodale Eastman’s (wife of Charles Eastman) memoir Sister to the Sioux, where she recounts Rev. Charles Cook’s actions during Wounded Knee. 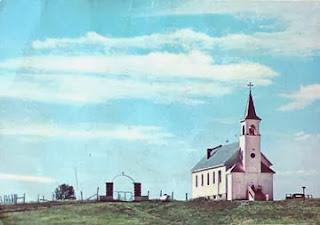 Jacqueline Keeler is Navajo and Yankton Sioux. She is producing a documentary, “7-Oil-1: Inside the Bakken” about the oil boom on the Ft. Berthold reservation in North Dakota and a mother of two living in Portland, Oregon.