This past Tuesday I tried to have a normal day. I knew it was December 19. I knew that day was the eighth anniversary of House Resolution 3326.

H.R. 3326 is the 2010 Department of Defense Appropriations Act. It was introduced by Senator Sam Brownback (Republican), passed by the US Congress and signed by President Barack Obama (Democrat) on December 19, 2009. It is a 67-page bill laying out the appropriations for the DoD for 2010.

However, unbeknownst to most people, on page 45 is sub-section 8113 which is titled “Apology to Native Peoples of the United States.”

What follows is a 7-bullet point apology. This apology mentions no specific tribe, no specific treaty and no specific injustice. It basically says, “you had some nice land, our citizens didn’t take it very politely. Let’s just call it all of our land, and steward it together.” It then ends with a disclaimer stating that nothing contained in this section is legally binding.

To date, this apology has not been announced, read or publicized by the White House or by Congress.

I learned about this apology by accident on December 19, 2011 and was appalled. How could our nation, and our leaders, bury something like this in a Department of Defense Appropriations Bill???

That day, I committed to do whatever I could to publicize this apology. And on December 19, 2012 I had the privilege of hosting a gathering of approximately 150 friends, partners and fellow citizens. We stood in front of the US Capitol and publicly read this apology.

We read several pages of the sections before the apology (to highlight how inappropriate it was to place this apology in an Defense Appropriations bill).

We had the apology translated into the languages of Navajo and Ojibwe. This was to model for Congress and the White House, that when you apologize, you not only do it publicly, but you also make EVERY effort to have the apology as accessible and understandable to the offended party as possible.

We then gave people in the audience an opportunity to react and respond to the apology. Because that’s what you do when you apologize. You let the offended party speak.

I respect President Obama and Governor Brownback. Both men have gone far beyond their predecessors in reaching out to native peoples. And I had hoped and prayed, up until the last moment, that one of them would step forward to take ownership of this apology. I invited them both to attend.

But unfortunately, they both declined.

So, in their absence, after the apology was read, and the people had a chance to respond, I stepped forward, took the microphone, and encouraged our native leaders, our communities, and our people to not accept this apology.

I was not trying to be divisive, nor was I trying to shame these leaders or our nation. But I did have an understanding of the situation and an appreciation for who our audience actually was. 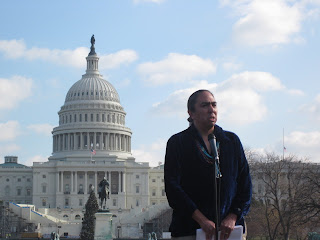 This event was not about me, nor was it about President Obama, Governor Brownback, or the 111th Congress. This event was about the historic relationship between indigenous peoples and our colonizers throughout the world.

The United States of America is a leader in this world; its words are scrutinized, and its example followed.

If Native Americans were to accept this apology, in the vague, politicized, disrespectful, and self-protecting way it was given, then we would be condoning our government’s actions and making a model of their methods. We would be communicating to indigenous peoples everywhere that we are still subservient to our colonizers, that we are not their equals, and that we should just be grateful for whatever scraps they bother to throw our way.

I could not let that message get perpetuated. I have too much respect for myself, for my elders, for my country, and even for our elected officials. So, I took a stand, and encouraged our Native peoples to not accept this apology. Not out of anger, bitterness, or resentment, but out of respect. Native peoples deserve better and our country can do better.

It is now 8 years since this apology was given, and 5 years since we publicly read it in front of the US Capitol. But not much has changed.

President Obama left office without ever publicizing it.

And President Trump…well, you know…his campaign rhetoric, environmental policies, blatant racism and sexism, and his unabashed love for Andrew Jackson, all speak for themselves.

To this day, most Americans do not know about this apology. And our nation still has not dealt with its history.

A reminder that there is much work to be done.

Mark Charles (Navajo) serves as the Washington, D.C., correspondent for Native News Onlineand is the author of the popular blog “Reflections from the Hogan.” His writings are regularly published by Native News Online in a column titled “A Native Perspective” which addresses news directly affecting Indian Country as well as offering a Native perspective on national and global news stories. Mark is active on Facebook, Twitter, YouTube and Instagram under the username: wirelesshogan