NORMAN, OKLAHOMA – Shoni Schimmel, one half of the “Umatilla Thrillas”, scored 16 points as No. 5 Louisville beat Oklahoma 97-92 in overtime on Sunday to win the preseason WNIT title.

Trailing 95-87 in OT, the Sooners scored five straight to cut it to 95-92 with 25 seconds left. The Cardinals (4-0) turned over the inbounds pass and the Sooners had a chance. Morgan Hook’s 3-pointer missed and Oklahoma grabbed the rebound. Oklahoma guard Aaryn Ellenberg had one last shot but her 3-pointer also fell short.

Not to be outdone in a big game, younger sister Jude Schimmel scored the final four points in regulation for the Cardinals to tie Oklahoma 86-86 to force the overtime. She contributed eight points on the night also had a team high six assists and added two steals for the game.

“Jude Schimmel got the rim so fast,” said Head Oklahoma women’s coach Sheri Coale. “I thought it was her layup, before the layup that tied it that really hurt us. If we could have just forced them into using 10 to 12 seconds on the shot clock, it’s ours. We own the game.”

This was the first road game of the season Cardinals and it was a big one. “Big win for my girls today. So proud of them and the opportunity to compete in this tournament.” Head Cardinals coach Jeff Walz said.

Earlier in the week, coach Walz sent out an email asking the many Oklahoma Native American tribes and its members to come out and support his team and the Schimmel sisters.  The email said the sisters would be available after the game for an autograph session and Oklahoma Native Americans showed up in support as you could see the hundreds of people in the crowd at the game there to watch Shoni and Jude. 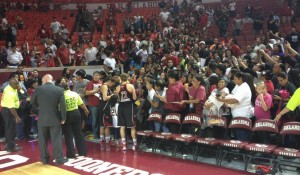 Initially, the autograph session was going to be moved outside by the University of Oklahoma athletic department due to safety concerns but assistant athletic director Charlie Taylor from Oklahoma was able to accommodate space and provide security for the Cardinals dynamic duo inside the Lloyd Noble concourse area after the game where a crowd of an estimated 300 Native Americans showed up for autographs.

One of those fans who stayed around after the game was Sara Willie, an enrolled member of the Chickasaw Nation from Ada, Oklahoma. “Even though I’ve met the girls before, we still stood in line for two hours after the game. Not for any autograph but just so my little Beans (6yr old daughter) could have a chance to meet them face to face. What the Schimmel sisters are doing for the Native American world is far more than just basketball. They are proving to everyone, that dreams can become reality. That Natives don’t always end up as statistics.” She said.

Although it is still early in the season, this victory on the road by the Cardinals against a quality program like Oklahoma will give this team the confidence and experience it needs to make another deep run at the women’s NCAA tournament come March.

Next up for the Cardinals is a home game against the Ohio University Bobcats on Thursday November 21st at the KFC YUM center. Tipoff is set for 7:00 PM EST.